This is the HR-14, the Rapid Deployment Force version of the Tonka Hand Commander Turbo Prop.  Like the RDF figures, it’s a simple repaint of an already existing Tonka Play People vehicle to make a military version, sold to ride the GI Joe wave. 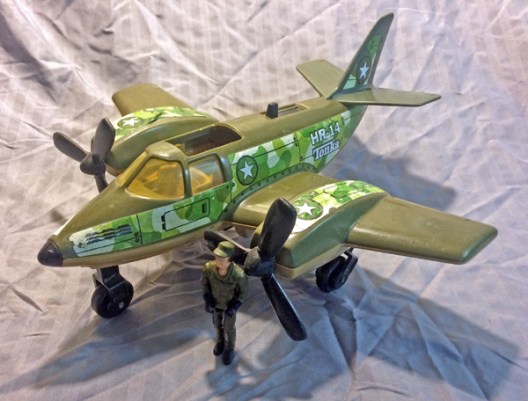 Or, at least that’s what I believe it to be.  I talked about this in my article about the RDF, but I remember this vehicle (and the RDF version of the aviator) belonging to my brother, circa 1982.  The pictured items are eBay purchases and not the actual ones my brother had- but I’m certain they’re the versions I remember.  I’m referring it to as the HR-14 because that’s what’s printed on the plane.  That may not have been the official Tonka name for it at the time.  I also may have not come with the aviator, but my best guess is that it did.

Tonka released the civilian versions of this aircraft back in 1979.  It came in various colors and markings, but this version is the one with the most appeal for Joe collectors.  The black one is also pretty dandy.  Again, I’m making assumptions based on my memories that this is an ’82 RDF version, but it could simply be that Tonka did an olive-with-camouflage-stickers version earlier.

Like Joe vehicles, it’s not quite to scale.  It also has a large handle on the underside.  There’s no closing hatch, leaving the pilot it exposed.
These things don’t matter at all.  The toyetic (I’m using Rob’s favorite word) value of this aircraft is amazing.  It looks good on its own or blended in with Joe figures.  It has working props, which are set in motion by a trigger in the support handle.  The landing gears (or is the plural just “gear”?) are retractable, controlled by a switch on the top of the plane.  Hasbro obviously liked this feature so much that it later mimicked it in the 1983 Skystriker.  Instrument panels surround the pilot, although there’s no yoke/joystick.  There’s also a small storage area behind the pilot’s seat, just large enough for a backpack and some gear.

The “Tonka Tough” mantra holds true.  Compared to other similar toy aircraft, this chunk of dense sturdy plastic is intact almost 40 years later.  Skystrikers, Rattlers, and Conquests all lose pieces over time.  A recent excursion through the cardboard boxes and Tupperware containers of Joe clutter in my attic confirmed this.  The Rattler, in particular, is so prone to crumbling/falling apart over time that I’d call it a design fail.  Hasbro’s designs may have been more advanced, but Tonka’s construction is far superior.  Action figure toys made now are aimed at adult collectors, but in the late 70’s/early 80’s they were still made for kids.  Durability counts for something, as it keeps the toy together through both play and neglect.

Was the inclusion of a “turbo prop” plane of this variety realistic for a modern army toy line in 1982?  Or today?  I have no idea.  Don’t know; don’t care.  The HR-14 is fun and rugged, making me wish Tonka had made its own versions of an F-14 or an A-10 so we could see them “still in one piece” now.